This is your very first post. Click the Edit link to modify or delete it, or start a new post. If you like, use this post to tell readers why you started this blog and what you plan to do with it.

This is an additional placeholder post. Click the Edit link to modify or delete it, or start a new post. If you like, use this post to tell readers why you started this blog and what you plan to do with it. 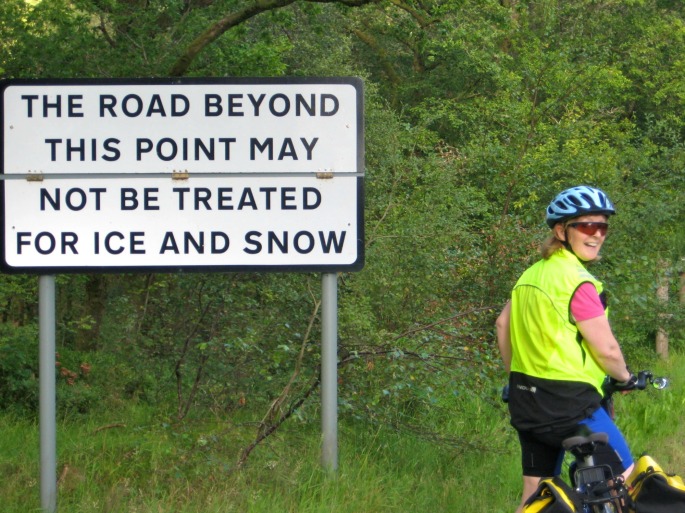 OK so I may be just a tad on the optimistic side, but with Spring and a new year ahead of me I thought it was time to give, “Pedalling on Regardless” a bit of a spring clean. Or at least a wash and brush up. So it is out with the old, but trusted and reliable, Coraline Theme and say hello to, “Publication” – all, ‘swishy in her satin and tat’ and about as subtle as a slap in the face with a wet cod. Who says old dogs must be stuck in their ruts?

I hope readers will bear with me as I learn and apply all these new features and frills.  What do you think?  Is the new look worth persevering with on first meeting?

We cycle in Portugal quite a bit and have done so for many years, so we are well used to encounters with dogs in remoter areas. Often the first indication I get is when Jacqui comes by me at a speed that would do Mark Cavendish credit.

However, when I came across this photo on the web, I realised that all things are relative and we had little to complain about. 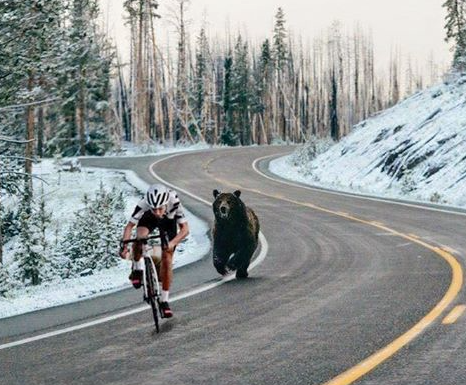 We have encountered wild boar and even a full grown bull in the past, but if we ever get to this point, we will be trading down to a four wheel cage for our future trips.

Following my last post this came my way. I am tempted to say (i) from the sublime to the …; and (ii) I really do have to get out more…  It is a little catchy, however, and sounds like a lot of fun.

It was wild, wet and windy (again) today, so I surfed a little instead of riding – don’t be too hard on me, I did get out for a jog. One link after another led me to GizMag and their top ten cycling innovations of 2013. Top of the list is the intriguing Hammerhead for Bike Navigation.  I think it is well worth a look.

The new startup team behind Hammerhead say they are inspired by simplicity – get the essential right then junk the rest is their philosophy: in this they (and their advertising video) reminded my strongly of Apple and that cannot be bad.  Their breakthrough to simplicity ideas include:

I like this idea a lot for several reasons:

I see Schwinn have an alternative out (see below), so I will wait until some user reviews appear, but I hope I won’t have to wait too long.  This looks like a great device full of promise.

This is a trip he have done a number of times now and we have settled on the ferry as our preferred border crossing. Brilliant for bikes, convenient, cheap and even just a touch romantic.  What’s not to like? (We are not sure whether or not it’s possible to use the bridge that carries the motorway, but in any case it looks very daunting.)

The ferry runs every day of the week, takes about 20 minutes for the crossing and leaves on the hour from Vila Real de Santo António and on the half hour from Spain. It costs about 8 euro for two passengers and two bikes.  You can ride your bike on and while there is no obvious way to secure bikes on board, the boat is very stable and we have never had a problem with the bikes falling over or sliding about.

There is a terminal building on the Portuguese side, but not in Spain. Both sides have ticket offices. Both terminals are a literal stone throw from pretty squares with lots of cafes and restaurants.

When in Vila Real we stayed in the Arenilha Guest House. This was very modern and comfortable and they kindly allowed us to store the bikes in their secure inner patio.  The hotel is 5 minutes from the ferry and surrounded by hundreds of places to eat and drink. In Ayamonte we stayed a the Hotel Riavela. This was a nice, family run hotel and they were very bike-friendly with good safe indoor storage. The hotel is 10-15 minutes from the ferry by bike, but a long walk from places to eat.

The ferry terminals are very easy to find, tiny and so very relaxed affairs.

There are some days that just start off sad.  Too sad really. Unfairly sad. Unreasonably sad. Today was one such beginning with the news that Peter Root and Mary Thompson (Two on Four Wheels) have been killed while cycling in Thailand.

The news came to me via a touching tribute video posted on Vimeo by Tom Waugh.  It catches their warmth and matter of fact bravery so well.

I spent sometime today replaying some of their videos on Vimeo.  I have decided this one of their trip  through Turkey into Iran is my favourite.  It has all of their humour and love of life and shows them typically comfortable around and loved by all of the people they met on their trip.

They were clearly a very special couple and have been taken from us way too soon.  It should not have ended this way. Their videos showed them so full of life and so talented in so many ways. My thoughts go out to their families and friends and to them both. Rest in peace and know that you touched many, many lives as you passed by.

Thinking of taking your bicycle on Eurostar London to Paris? We found we had to when our ferry crossing was cancelled on strike action. It was a last minute thing and we had no time to plan it, but it worked well for us.

We bought our train tickets online, but did not see a way to book the bikes on online. So we pitched up at St Pancras and picked up our tickets and advice on what to do with the bikes. We were sent off to the Euro Dispatch office and told to go ASAP as we had no reservations. On arrival they sucked through their teeth at the news we had not booked, but set about the paperwork immediately. We had to remove all accessories from the bikes, including lights and bells. But with a minimum of fuss the bikes were whisked away. Crucially, we were given a map of how to locate the Geo Parts depot in Garde du Nord. Without it we would have been well lost.

Ok at £50 it was far from cheap, but the convenience counted for a lot and the friendly and helpful service at both ends was very welcome. We’d recommend Eurostar to cyclists – with deep pockets if you have not booked early enough to get decent fare levels.

If you are planning a cycle trip to China and you want a sense of just how demanding it might be, this might be the perfect primer.  Or, it just might put you off going!

Cindie Cohagan and her husband Tim had been cycling around the world for some years before they arrived in China.  They were hardly novices therefore, but by this account the author found China a great challenge.

Most of the content deals with the nitty gritty of the daily grinds of their cycling. As the author has a clear and very accessible writing style, she gives a vivid account of the people they meet, the food they eat, the places they stay and their continuing struggles with petty regulations and the officials charged with ensuring compliance with them.  As a source of first impressions of China the book makes for a lively read therefore.

Woven through the content are three main themes.  The first and second are counterpoints: the warmth and friendliness of the poor of the rural areas they find on the one hand and the petty, but threatening presence of the police and communist party officials on the other.  The third theme is the slow, but steady disintegration of the author’s relationship with her husband.  This last theme casts a shadow over the book, although their final separation is apparently achieved reasonably amicably.

The author’s sympathy for the ordinary Chinese she meets is clearly heartfelt and genuine.  She struggles hard with the language in her determination to connect with the people she meets. Notable too, is her gratitude for the kindnesses they show to her and Tim.  From these beginnings spring an interest in Buddhism that grows and becomes a sustaining passion – hence, perhaps the title of the book.

The wider perceptions of China reflected in the book rang less than true with me. Within days, for example, they find themselves in trouble with the police for photographing a military complex and a squad of prisoners on a working detail.  This they see as entirely unreasonable, but I could not but compare their quite reasonable treatment by the officials with what they might have expected if they had taken such photos in say, Greece.

Similar over-reactions arrived when they tried to order chicken without its head or feet in a restaurant. Or, in what for me was a pivotal incident, when presented with the gift of two apples by a farmer, her insistence in cleaning them by soaking in iodine before eating them.  Other examples include outrage when forms are not filled in in hotels or party officials monitor their comings and goings in small towns.

All of these build a picture of some level of paranoia. Then the penny drops for the reader.  The author appears to have no wider appreciation of the nature of the Communist regime or of Chinese history and culture.  People eat every bit of everything because they know what starvation means.  Government struggles with the delivery of services on a scale we can hardly imagine.  And, yes, it’s true, it is a totalitarian regime and a police state.  Why did the author expect to find something else on her travels?  Perhaps the most amazing and hopeful thing is that they were allowed to make the trips they did and that rules and regulations were waived as often as they were.

Finally therefore, this is a book that promises rather more than it delivers.  It is a good light read and will certainly help the would-be China cyclist prepare for a trip.  However, deeper insights into  Chinese society, culture and history are sparse and to my eye, unreliable.

In the epilogue to her book, the author suggests she has found a new community and purpose for her life after leaving Tim and her travels.  I am sure all readers of her book will wish her well on this new stage on her journey towards enlightenment.