Our bikes are two Raven Sport Tours from Thorn/SJS Cycles in Bridgewater, Somerset. We have had them in September 2010 and they have been a stunning success.  We love them.

Why did we choose Thorns?
In truth, we almost didn’t. When researching possible bikes we did look at Thorns, but decided that they were too expensive. We were just on the point of buying Dawes Galaxy bikes from our local bike shop for about half the money, when (truly by accident) we found ourselves on biking holiday in Bath. We noticed that the Bridgewater home of SJS Cycles was only 20 miles away and so we decided to book ourselves in for a tour of the factory and a possible fitting.

We ended up spending the better part of a full day with Andy Blanche (the bike’s designer) and left having parted with more money than we could ever have imagined and as the proud (but rather shocked and frightened) owners of two Thorn bicycles. It wasn’t a matter of Andy subjecting us to any hard sell: far from it, but the pleasure of spending time with someone who knew literally every nut and bolt on the bikes and an extended test run over lunchtime decided us that this would be money well spent.

A big part of this was undoubtedly the care with which the bikes were specified for us and the attention to detail that was given to making sure that they fitted us properly. While fitting Norman’s bike was relatively straightforward work, Jacqui needed a tiny frame and Andy spent ages ensuring that the test bike was set up correctly and that the bike purchased would be just perfect.

If you’ve never had the pleasure of sitting on a bike that is exactly specified and set up for you you won’t know just what a pleasure it is to ride such a bike.  I guess this attention to detail costs and that is only reasonable.

The bike setup
We spent a considerable amount of time talking with Andy about how the bikes should be set up. He was very attentive when listening to what we said we wanted to do with the bikes and the type of touring we were interested in. It was quickly clear that we did not need an adventure or expedition tourer, but instead something that was set up for hotel-based, “credit card” touring, probably mostly in Europe, and mostly on paved cycle tracks or minor roads.

We did spend some considerable time debating the relative merits of the Sport or basic Tours: on balance we decided that we would prefer to travel as light as possible and therefore the Sport version was a better choice. (Since we bought our bikes Thorn have somewhat changed the advice on weight limits for both bikes:  read the current brochure with care before deciding.  I might make a different choice if I was choosing today.)  After six years of use and three month-long tours we are sure we made the right choice for us.

We debated at length whether we should go for flat bars or butterfly bars. Andy made it very clear that he did not himself favour butterfly bars. However, he also made it clear that if we decided we definitely wanted butterfly bars then they could be fitted. In the end we went with his advice and decided for narrow, flat bars fitted with SJSC Ergo Control bar end grips.  We have not regretted this choice and still have the same set up six years on.

On the road these provide us with two or three different hand positions each of which is relaxed and comfortable. Using the bar ends gives a position remarkably similar to riding, “on the hoods” on a bike with dropped handlebars. As neither of us would ever consider riding on the drops for any part length of time we are very happy with this choice. 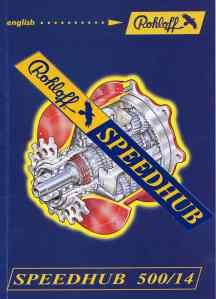 A lot of time was spent deciding on the gearing for the bikes. I was worried that the gearing for the Roloff might be a little low. Andy was clear however, that we should aim for gearing which meant that we would never have climb off of the bikes however steep a hill we faced. His other benchmark was the hope that in gear 11 (out of 14) with a good cadence we would be able to maintain good speed on flat or nearly flat terrain. This meant that we would have gears 12 through 14 where we could go faster and we would then just accept that on steeper down hill sections we would freewheel when we ran out of gears.

I took a little convincing that this was a good idea but in practice it has worked out very well. You need to remember that these are bikes specially chosen and set up for touring with panniers rather than for flat-out speed. With this in mind the setup has proved to be pretty well perfect in use.

Time was also spent on deciding on cranks: here we just accepted Andy’s advice that the important thing was to go for a length that would help avoid any strain on our knees.

In use we have come to love the bikes. The speed hub and its gear changing is a real revelation. The linear 14 gear changer with each gear 13% higher than the one before encourages smooth, even acceleration on the bike.

There is something very satisfying about matching the effort that you’re putting in to the gear that you’ve chosen and the speed that you are going. It’s reassuring to know that the bike is set up in a way that is designed to take strain off our (aging) knees.

This is not to say, that the Rohloff speed hub is perfect. As others have noticed in gear 7 down to 1 it does produce a marked amount of ‘whirring’. However, this is not too obtrusive and it does serve as an encouragement to try and stay in gear 8 or above wherever possible.

Our bikes don’t have suspension. They do have 26″ wheels and 1.75″ tyres. In use these provide an amazing amount of cushioning and comfort. I still prefer the sense of making progress that comes with using them on smooth tarmac, but if needs be they cope well with (slightly) rougher canal towpaths or tracks.  More to the point, we are 6 years and perhaps 20,000K in and are yet to have our first puncture.  Now saying that’s definitely asking for trouble!

Overall we are delighted with our choice and the shock of the cost wears off after a while! Then after years of carefree touring and local use, they begin to feel like great value for money. 🙂

The technical brochure relevant when we bought is available here as a PDF.

3 thoughts on “Our Bikes”